Are you ready to celebrate the 6th birthday of Le Monastère?

Welcome to this new and very special edition which promises to be emotionally rich!

We are expecting a festive atmosphere as, on top of being the last cabaret of the year, it will also be our birthday. We are planning many surprises throughout the evening to celebrate our 6 years together!

Visit the bar during intermission to order your favorite Quebec drink! 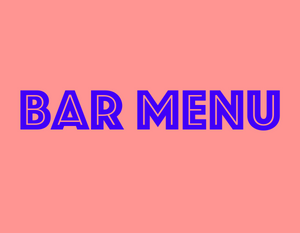 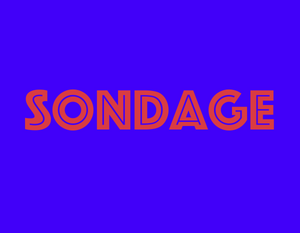 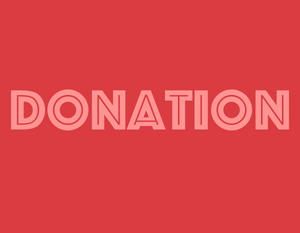 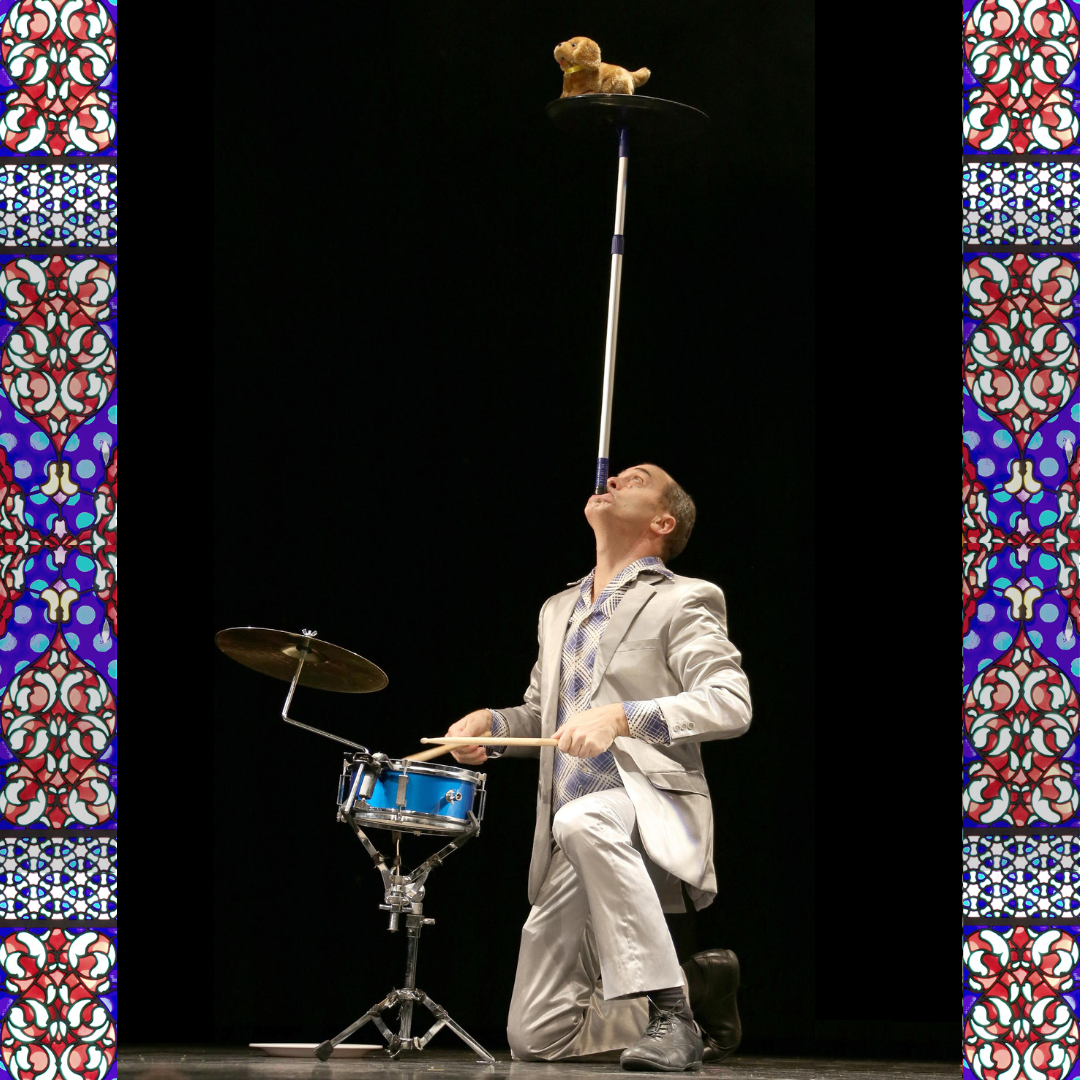 Having started out as a unicyclist, Johnny has been immersed in the circus scene for over 40 years, developing a multitude of theatrical and musical skills.
During his 20 years with the duo “Les Voilà!” with Soizick Hébert, he created a somewhat absurd character with a unique sense of comic timing. He can sometimes play the double bass or the drums, sometimes perform juggling, and other magic tricks or balancing feats. The creation of these comedic scenes is an important component of his work.

He has also created soundtracks and custom props for several companies, as well as accompanied various musicians on stage or in the studio, including Bertrand Gosselin, René Lussier, Jean Beaudet, Denis “Raoul” Hébert and Claude St-Jean! 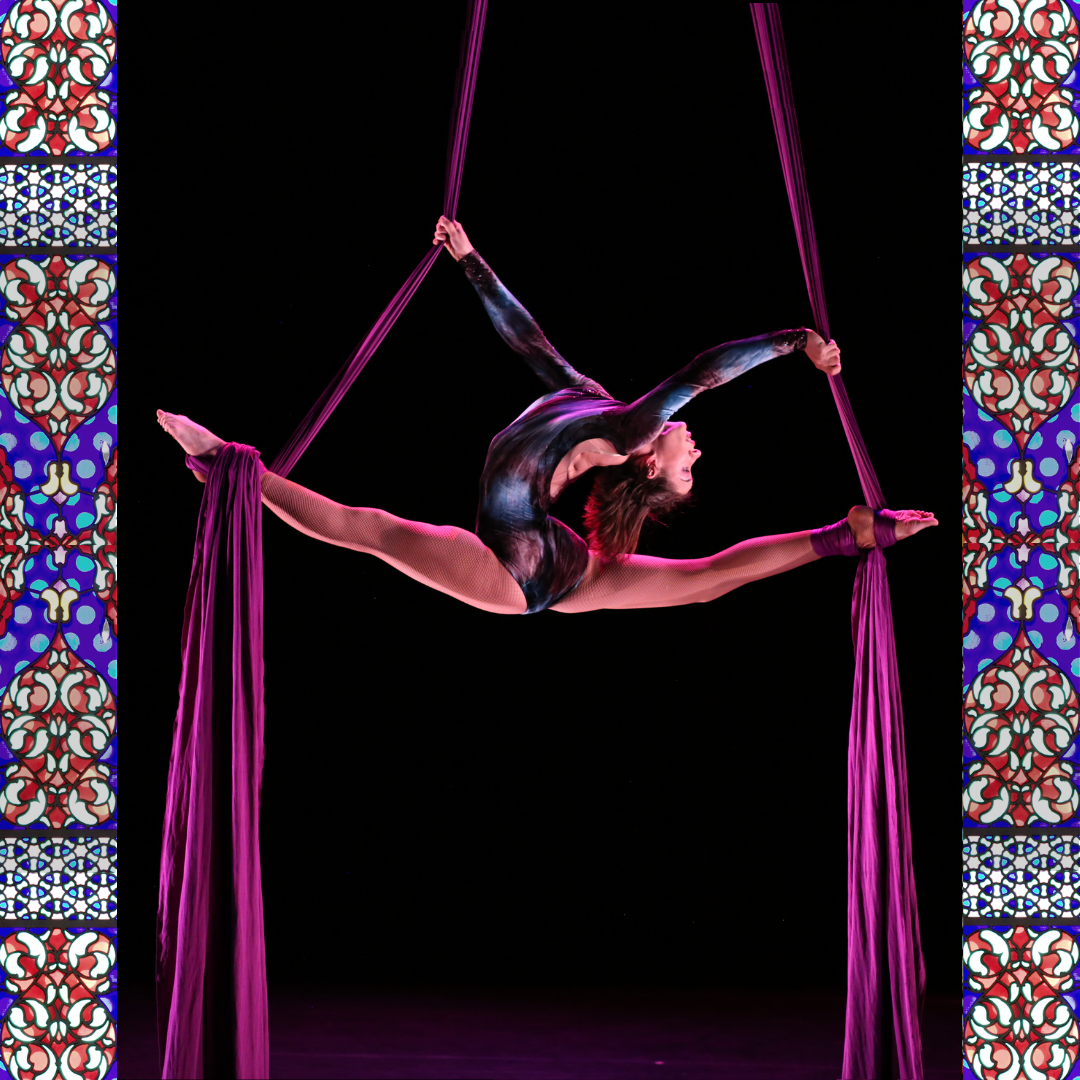 With a degree in nuclear engineering, Tanya left this career path to enter the world of circus and become a professional artist. She now specializes in aerial silks and hoops and her career has spanned 15 years and four continents. She has worked with shows both large and small, always bringing her unique and unforgettable style.

She will present an aerial silk act named “Sunset Starlings” which she describes with these words: “At dusk, a unique natural phenomenon: thousands of starlings fly in hypnotic formations called murmurs. No single bird leads, rather each responds to the movements of the 7 closest to it, with reflexes faster than a jet pilot. Being totally unpredictable, these formations protect them from raptors. This natural phenomenon inspired the movements in this number, highlighting the artistic idea that when we are in tune with our loved ones, we can do more.” 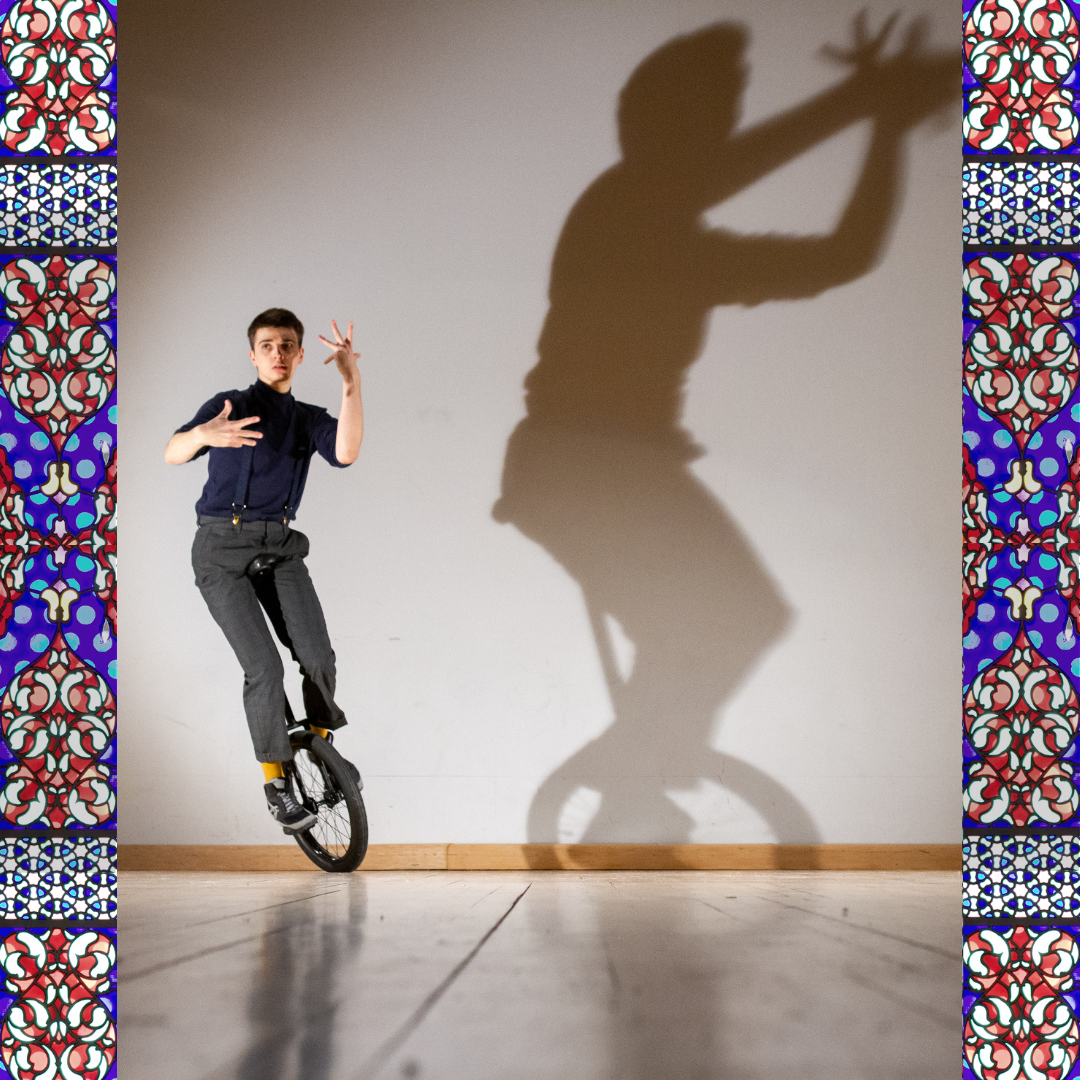 Esteban has always dreamed of being a circus performer. At the age of 3, he told his parents: “I want to be a clown when I grow up.” Thinking he would grow out of it, his father and mother decided to enroll him in a circus school.

As a teenager, he changed schools to join the Odyssey of the circus in Belfort, France, and discovered the unicycle and the Chinese pole, which are now his specialties. He also discovered life in a caravan and the world of circus tents, which he has learned to assemble, maintain and repair. Spending most of his time in this school, he has also learned about sound, light, rigging and show creation. With his spare time, he enjoys playing music (bass) and has a passion for DIY projects.

In 2018 he joined the ENC and specialized in his disciplines while also learning clowning and club passing. His different passions make him want to take part in all the technical and artistic aspects of a circus show, which is why he now dreams of creating his own circus company under a big top. 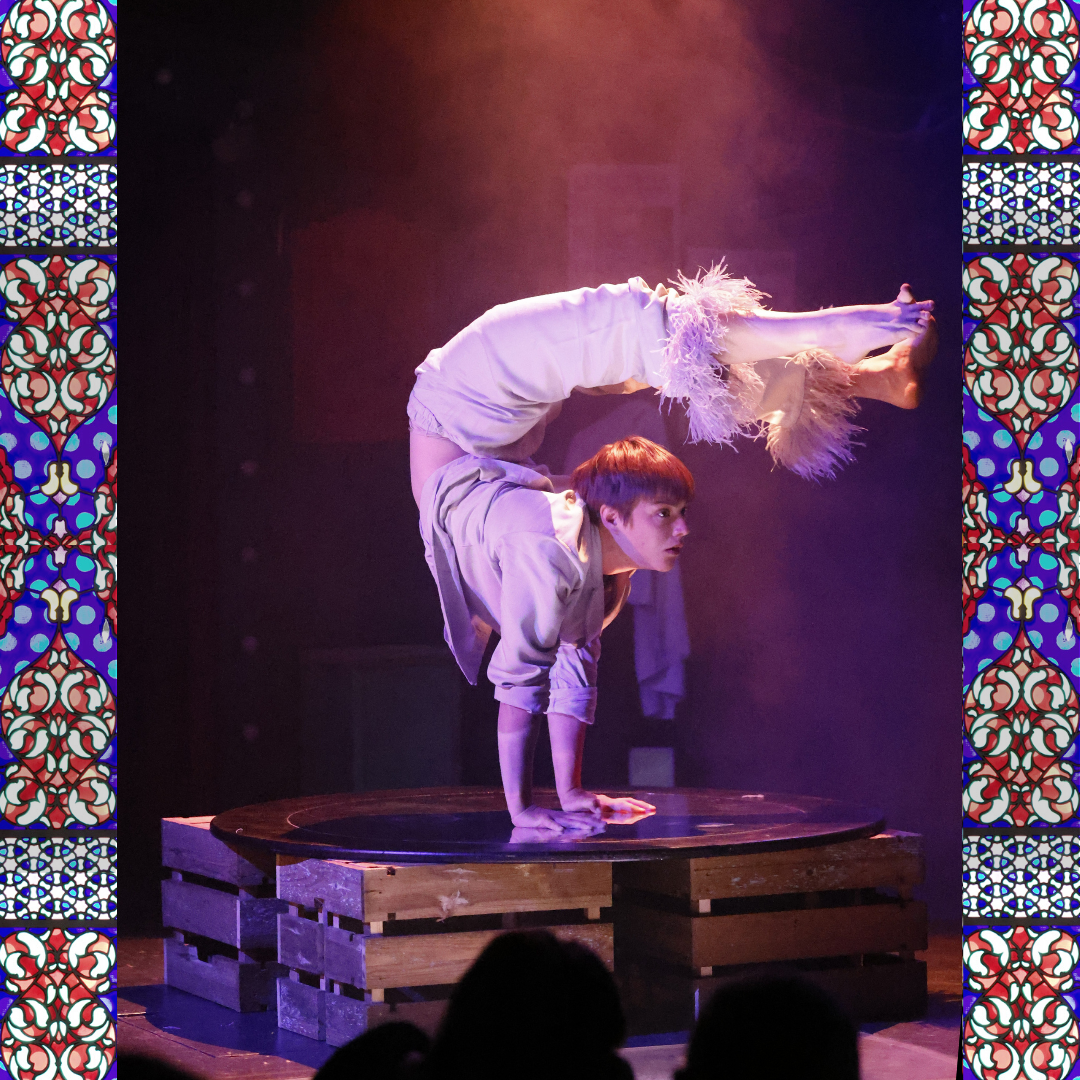 Maude was born in Quebec in 1991. At the age of 7 she started artistic gymnastics, but her growing passion for the performing arts quickly led her to the circus world. This is what pushed her to join the National Circus School of Montreal in 2009.

Since finishing her studies in June 2013, Maude has been exploring contortion through various mediums and supports, notably circus performance as well as photography, using the deconstruction of the body as artistic and dramaturgical inspiration.

Over the last few years she has collaborated with several companies such as: 7 Doigts, Broadway Variété, Nadères Arts Vivants. 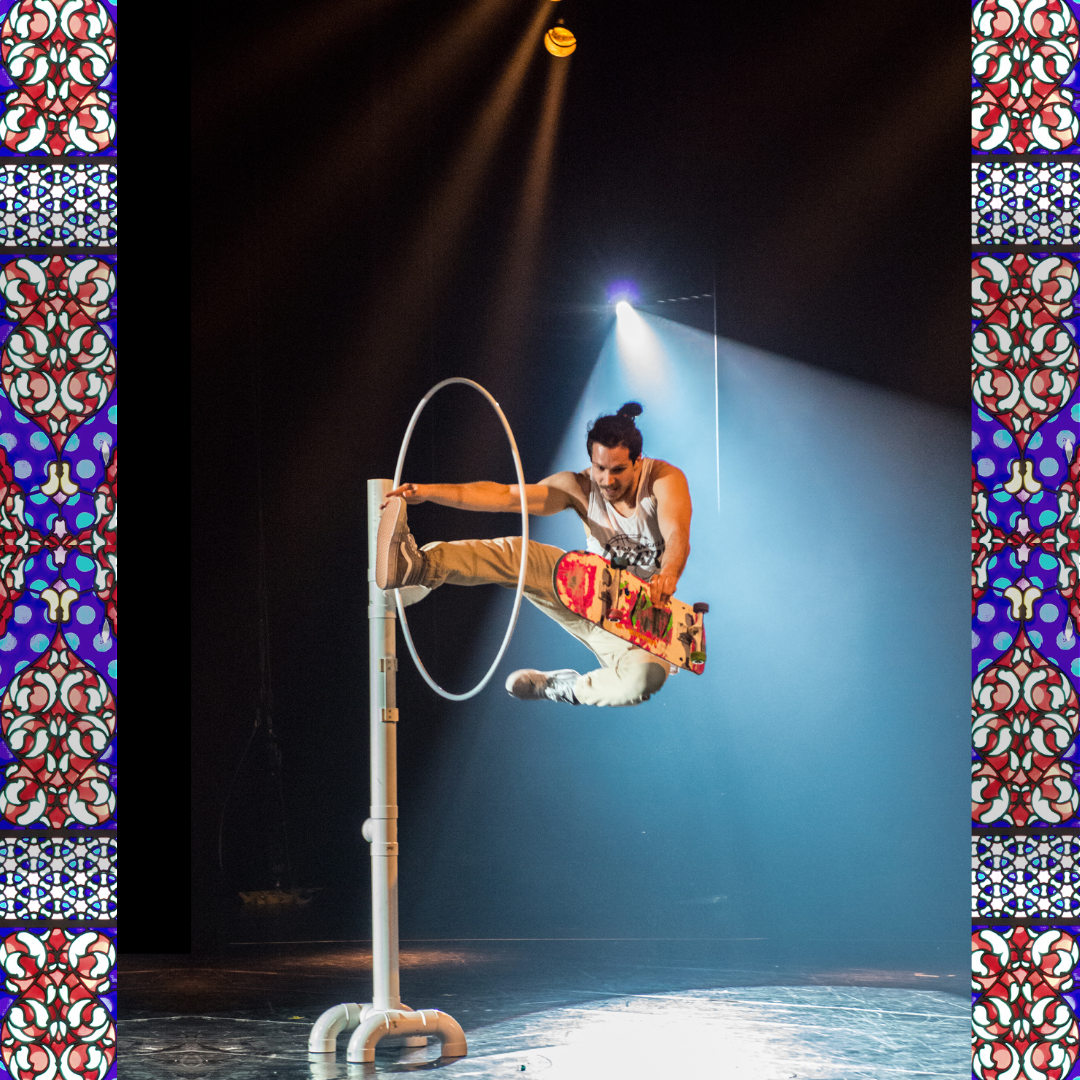 Circus artist, dancer, skateboarder, actor, stuntman; Vincent is passionate about all the movement arts. In 2010, he started dancing and exploring many different styles. In 2016, he finished his studies at the ENC and started his professional career in various companies. In 2018, with his partner Eline Guélat, he co-founded La Croustade: a creative company featuring multidisciplinary live arts. It mainly focuses its research and productions on luddism. This company’s mission is to help us rediscover our childhood souls.

On the stage of Le Monastère, he will present “Beigne, Psyché et Grenadine”, a number of manipulations created using the “method” of La Croustade. In this work of object manipulation, he will explore a mixture of different physical concepts that come mainly from his dance movement, such as speed, density, relativity of time, parallel worlds, connections, puppetry and image creation. He will let himself be guided in these investigations of movements, so that different forms of stories appear, ready to be shared with the audience. 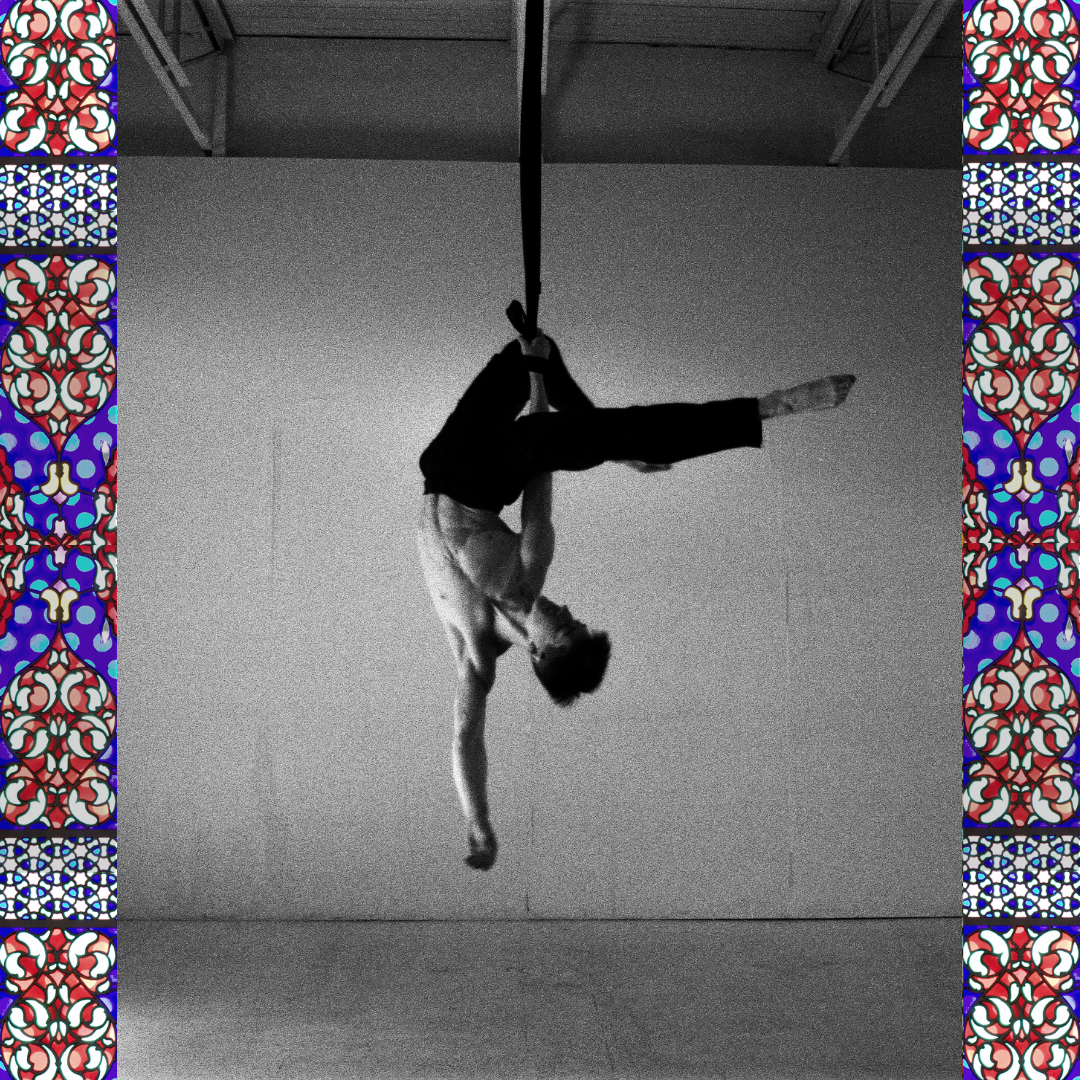 After presenting a moving aerial silks act at the April cabaret, Antione will now present an aerial strap act. In an intimate setting, this number will explore the relationship to the body, as well as the themes of distortion and sensuality. 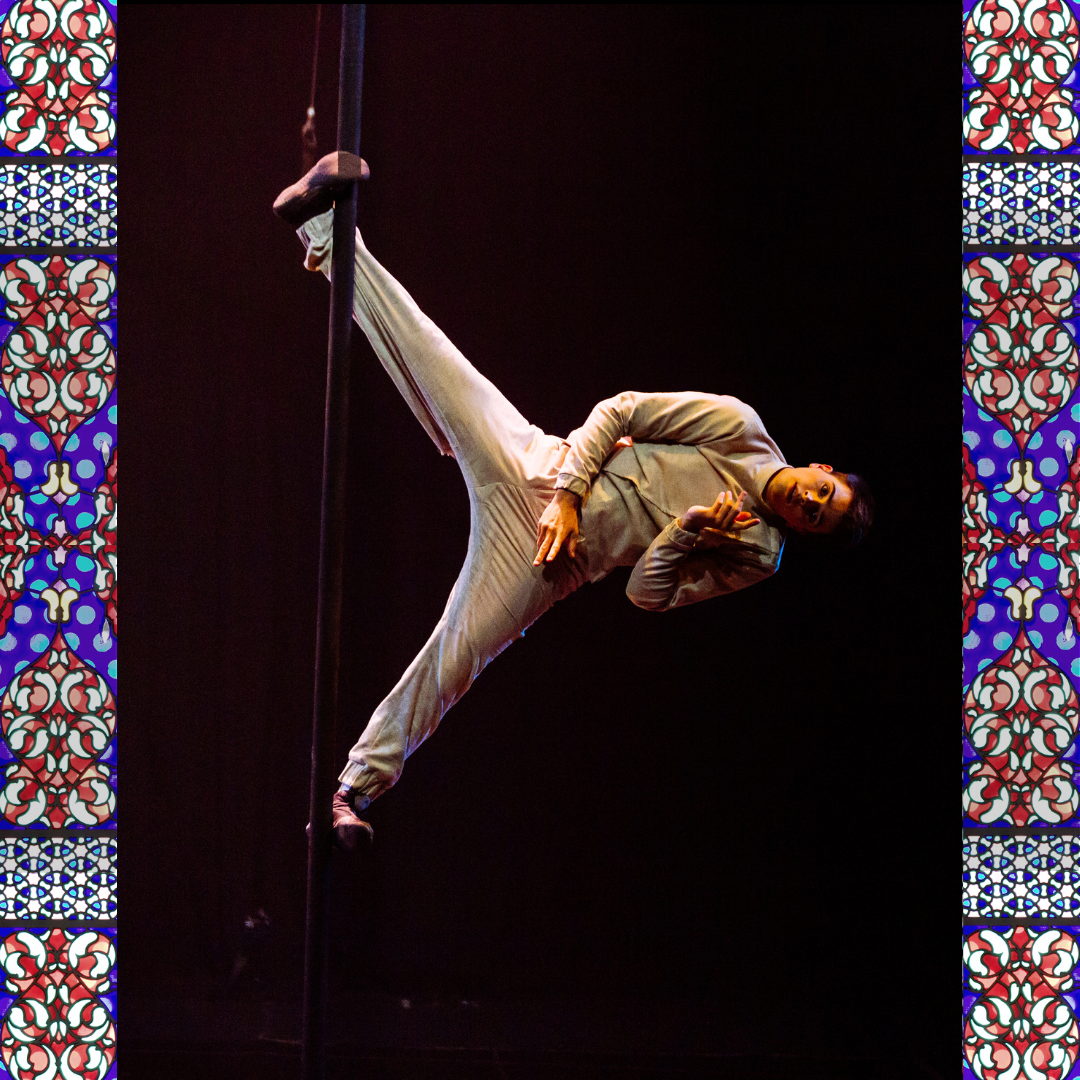 Esteban will be honored to be back on stage for a second time to offer us an act in a completely different discipline.

This multidisciplinary artist will impress us this time with a Chinese Pole act that he has tried to make lighter so that we do not feel the effort. He defines this act as a moment of softness. 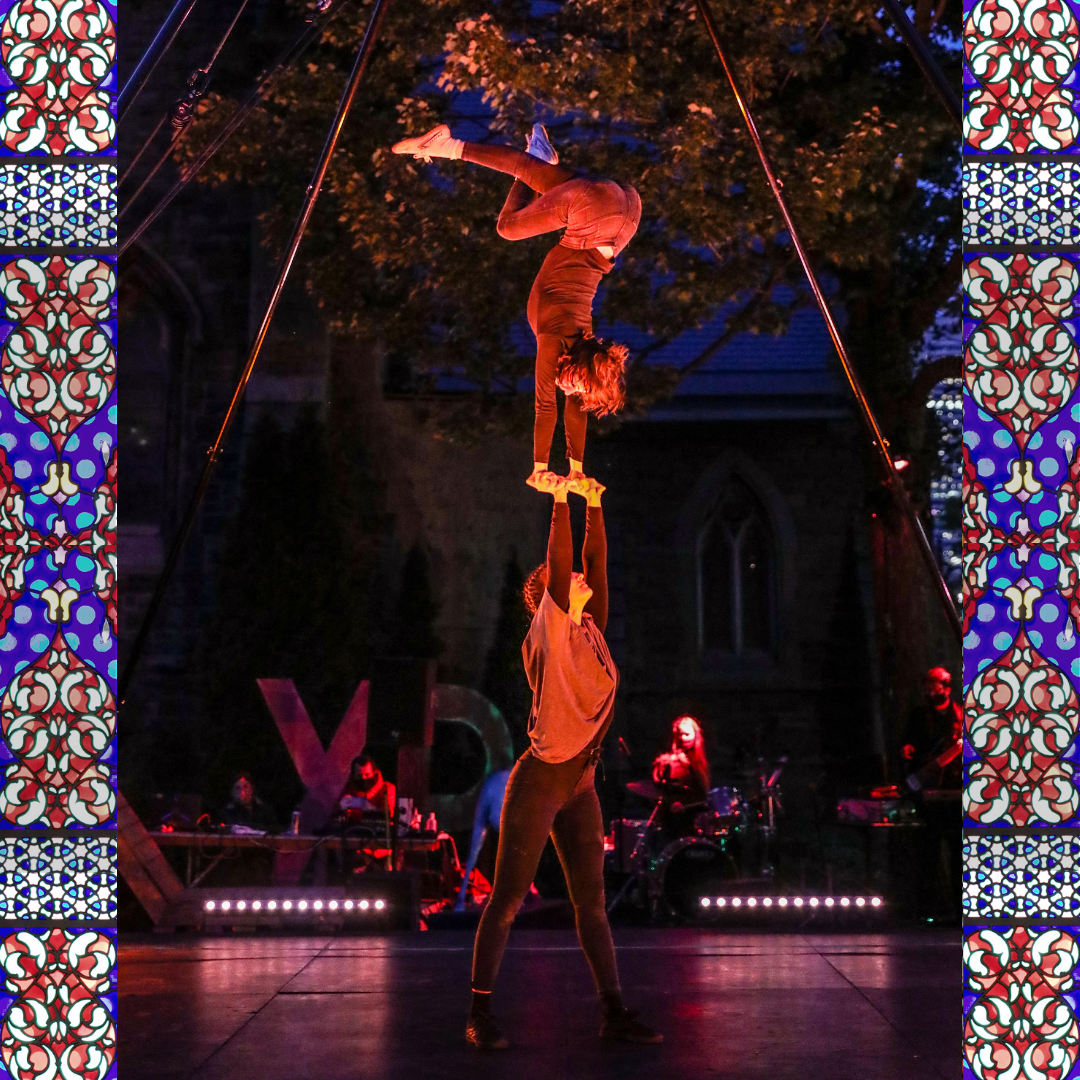 Catherine and Laurie have been working together since they were 13 and 12 years old. Both graduates of the National Circus School of Montreal, they have evolved together over the years, developing their own way of using hand to hand as a discipline. After a decade of friendship and work, they still continue to explore different paths together.

For this cabaret they have imagined a number that leaves room for the audience’s imagination. We discover an energetic, versatile and unique female duo. Two women, creatures, express their souls and grow together through their hand to hand act. It is clear that their world is created through a bond much stronger than the hands that unite them. 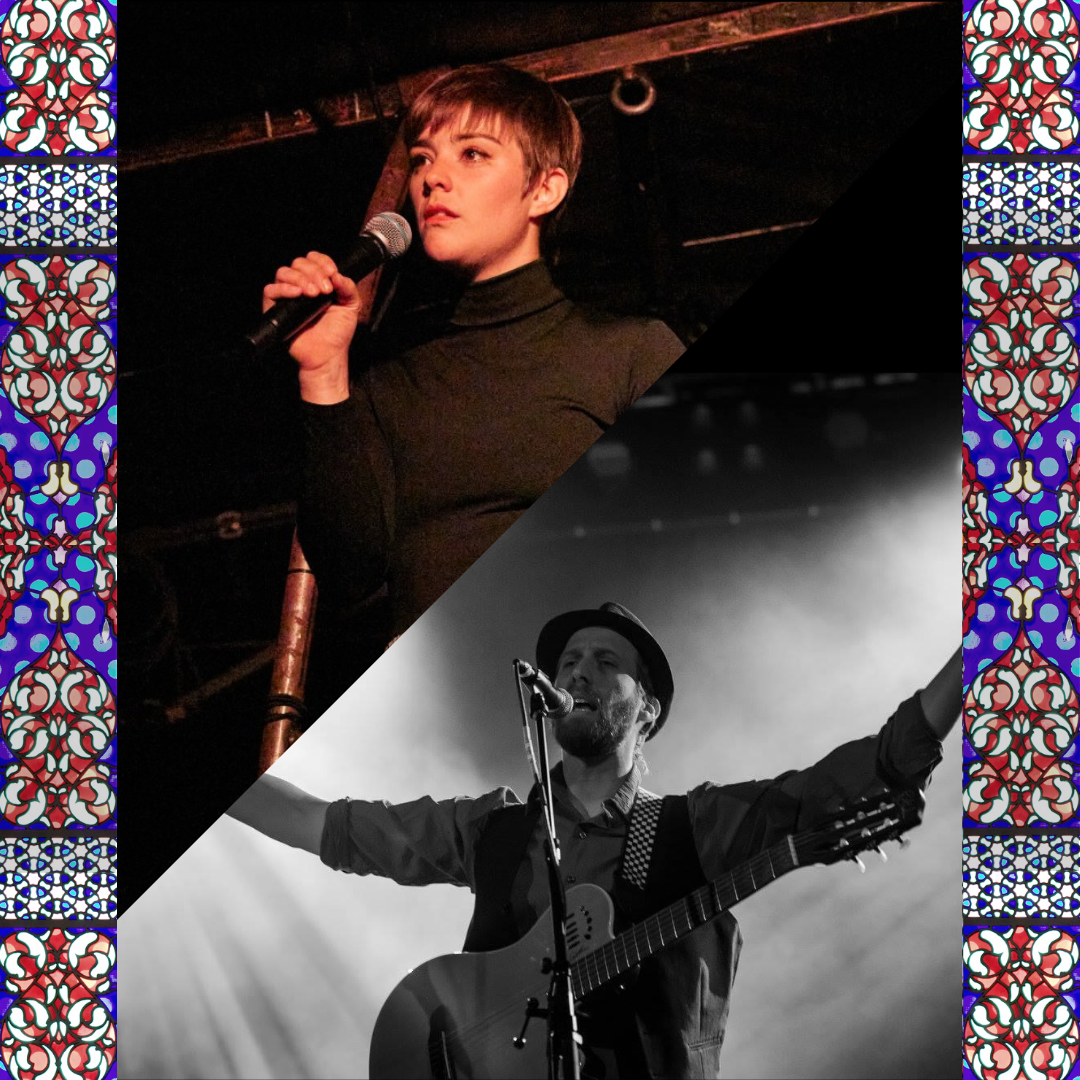 Martón started his musical career at an early age as a violinist. He found himself attracted by percussion when he met Eduardo Pipman, his first drum teacher.Learning jazz and groove feel, his classical background brought him to finish a BAC in percussion at University of Montreal with Julien Grégoire. In the last 10 years, he travelled around the world with Cirque Éloize’s Show “NEBBIA” where he performed various percussion and string instruments. He also performed all around Canada and also in Europe with many groups as multi-performer.

Martón is also mostly known as a drummer in ensembles like René Lussier Quintette, Solawa, Misses Satchmo, BRIGA and Sagapool. Also accompanying artists like Yves Lambert, Jérome Charlebois, Marco Calliari all around the country. Since 2016, he also presents more than a hundred shows each year for youth audiences with Jeunesses Musicales Canada. We can hear Martón on more than a dozen Quebec artists albums. 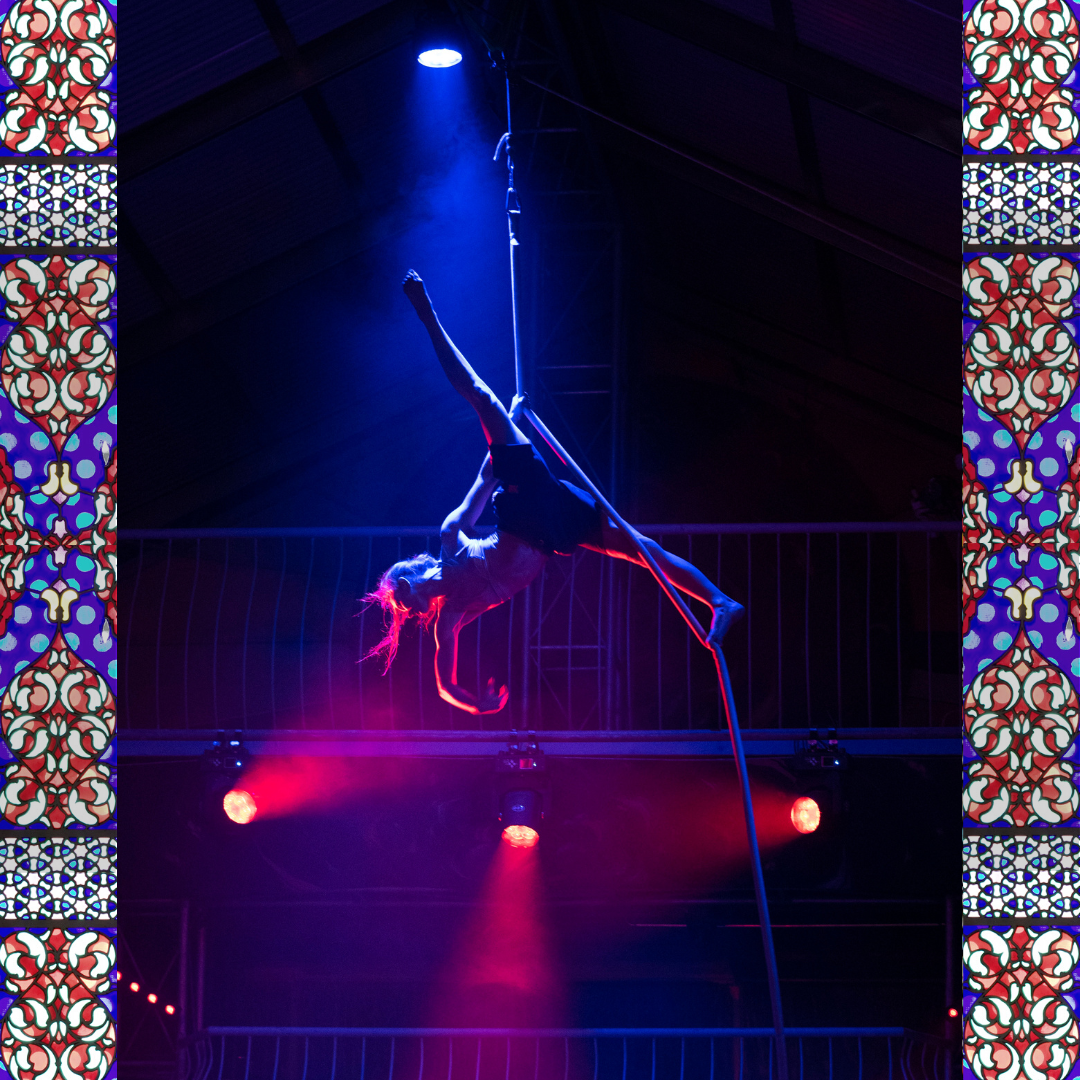 Emily is thought to be some kind of undiscovered reptile masquerading as a human and a circus performer. Growing up in northwest Australian desert and beginning circus at the young age of twenty-something, Emily trained at NICA and developed an otherworldly, virtuosic style on Aerial Rope. Their work across the European and Australian festival and cabaret circuits since emerging from hibernation highlight the freedom, intangibility, and manipulative dimensions of the apparatus and has gained worldwide acclaim.

Em is excited to present a work on Le Monastère stage created originally for the queer nightlife-inspired shows they’ve been headlining in Edinburgh fringe.

Thank you for the support!

We thank Patrimoine Canada for the support of these cabarets 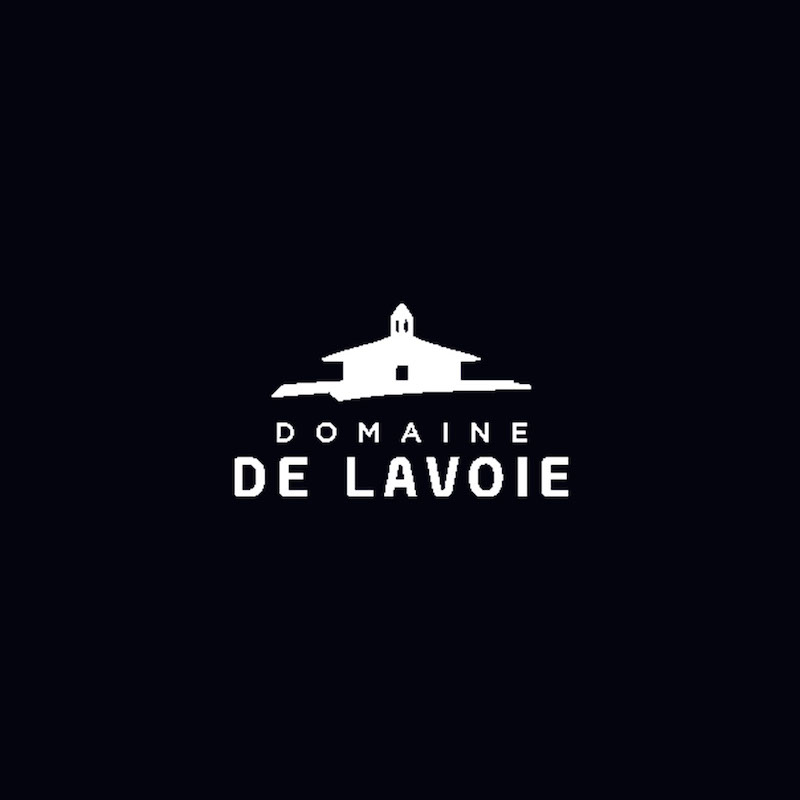 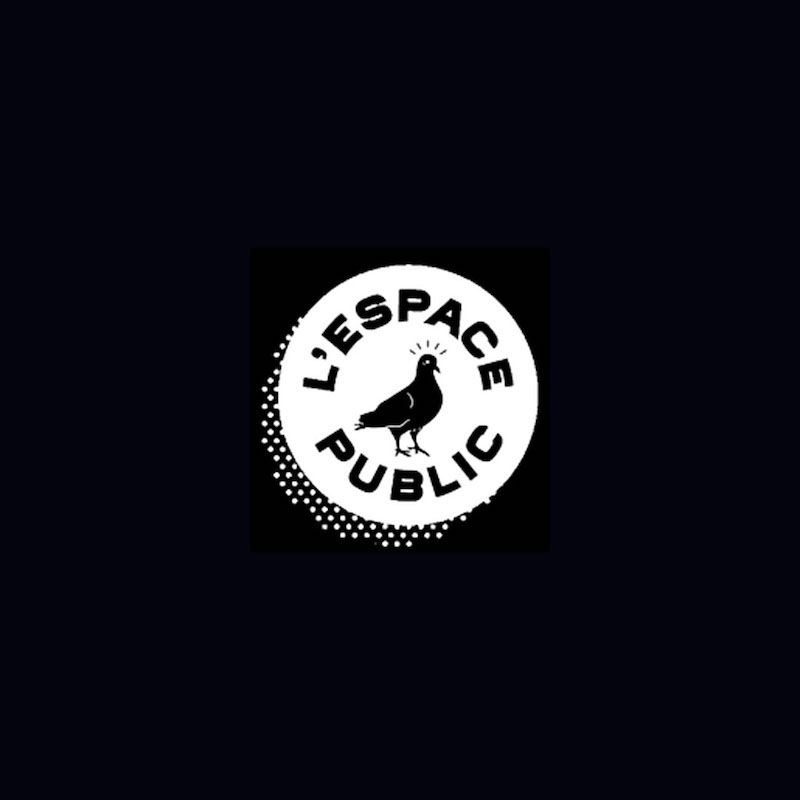 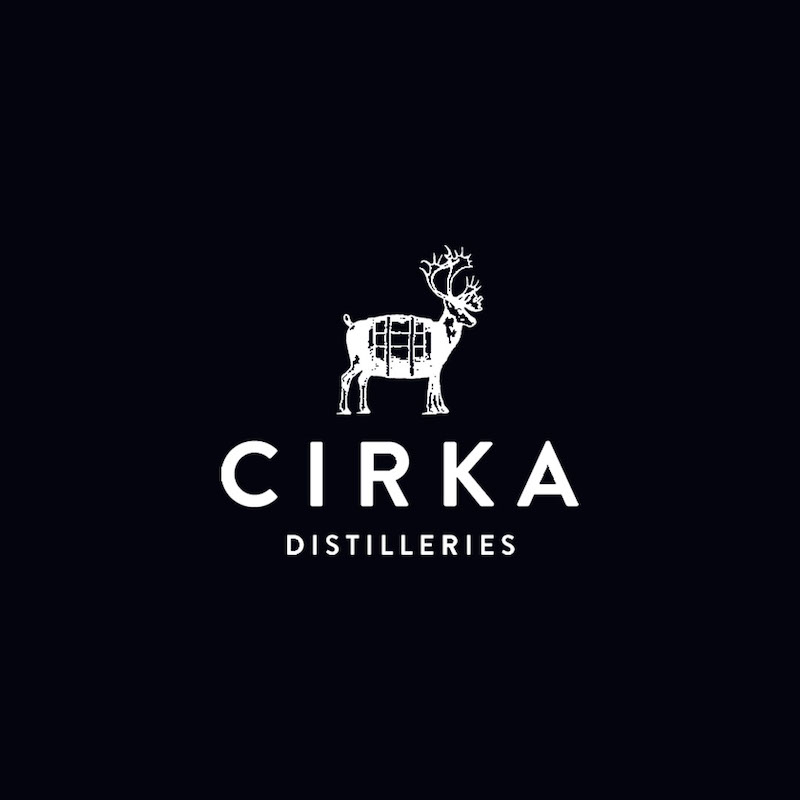 Fill in your email address so you do not miss any news!​